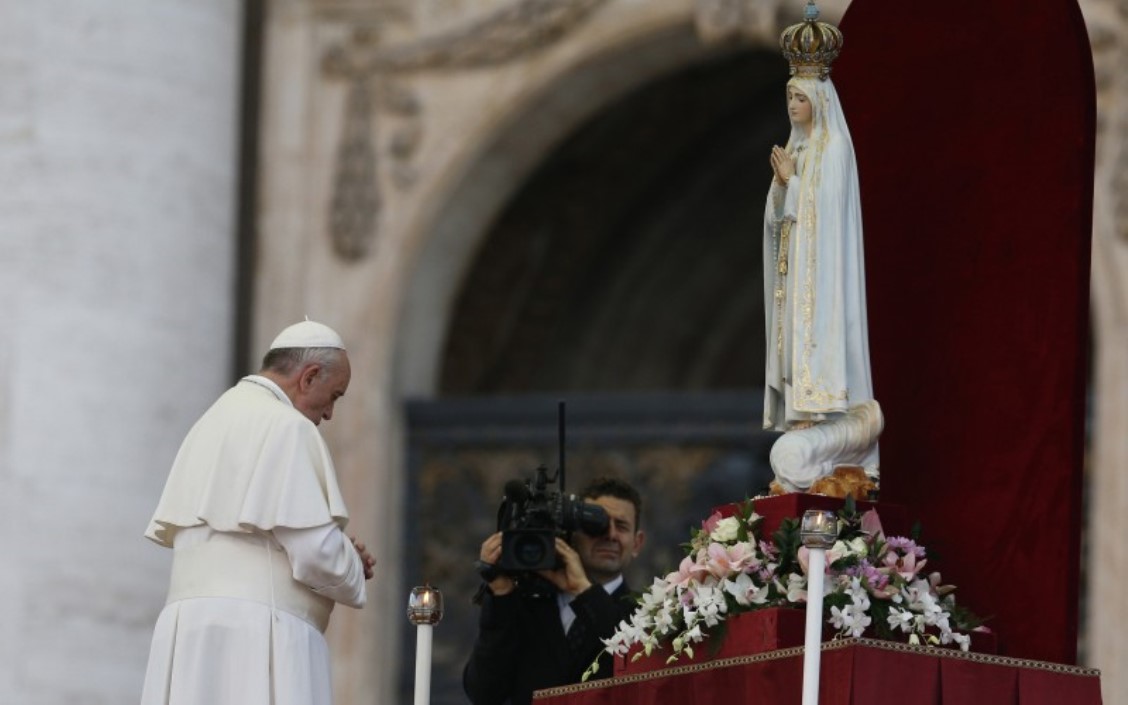 This morning, 13th May 2020, the feast of Our Lady of Fatima, referring to the Marian apparitions in Fatima,  Pope Francis said: “We turn in thought to Her apparitions and to Her message transmitted to the world, as well as to the attack on Saint John Paul II, who in the sparing of his life, saw the maternal intervention of the Holy Virgin.”

“In our prayer, let us ask God, through the intercession of the Immaculate Heart of Mary,” Francis said, “for peace in the world, the end of the pandemic, a spirit of penance and our conversion.”

He continued: ‘On the anniversary of the first Apparition to the little visionaries of Fatima, I invite you to invoke the Virgin Mary so that She renders each one perseverant in love of God and neighbour. …  I encourage all to know and follow the example of the Virgin Mary …  let us try to live this month with more intense and faithful prayer, in particular, by reciting the Rosary, as the Church recommends, obeying a desire repeatedly expressed in Fatima by Our Lady.”

“You will see, under Her protection,” the Holy Father reminded us, “that the sorrows and afflictions of life are more bearable.”

On this day, to continue our series of original reflections on our Lady for the month of May, from Chavagnes, we reproduce a sermon prepared for the 2016 Chavagnes Summer conference by Fr. LOUIS-MARIE DE BLIGNIERES, marking the centenary of the Fatima apparitions.

This year, the centenary of the apparitions of Fatima prompts us to meditate again on this great Marian apparition. In order to grasp the meaning of Fatima’s message, one must read in their entirety the three parts of the “secret” revealed on July 13, 1917, also taking into account the apparitions of the Angel who had appeared before, and the revelations that Sister Lucy subsequently received about the Immaculate Heart.

The guiding thread is “that light which is God”. It is when this light “penetrates their heart and into the depths of their soul” that the seers see themselves in God “more clearly than in the best of mirrors” (13 May). It is in “the reflection of this intense light” that they acquire “a special knowledge and love of the Immaculate Heart of Mary” (June 13). It is when “the reflection seems to penetrate the earth” that they have the vision of hell (July 13). It is finally “in an intense light that is God”that they have the vision, as if in a mirror, of the bishop clothed in white. The secret of the Immaculate Heart is a participation in God’s way of seeing our world: it is to “see, in God” sin, salvation and history.

First part: the vision of hell, with demons and souls plunged into the fire.

Contrary to what is suggested today in too many Catholic circles, hell is not empty! Many people are fleeing God’s mercy and falling into mortal sin – the forgetfulness and rejection of Love – and then into eternal hatred. “In the world, the incredulity of those who deny these truths is not wanting, but they do not cease to exist just because they are denied; and such unbelief does not deliver those who harbour it from the pangs of hell if their life of sin leads them there.” It is a call to enter into the order of love, to confess our faults in confession, in order to deserve to be absolved in the “tribunal of Christ” (2 Cor 5:10).

Second part: “To save sinners, God wants to establish in the world the devotion to my immaculate Heart”

The Queen of Heaven asks in 1925 for the communion of reparation of the first Saturdays and in 1929 the consecration of Russia. Mary indicates the fruits of obedience to her demands: salvation, the conversion of Russia and peace; And the punishments connected with ignoring them:  wars and persecutions against the Church.

What does this mean concretely for us? : we are responsible before God for our brothers redeemed by Christ! We must find “grace and mercy” for those who are far from God:

– by praying the rosary,

– by standing with Mary at Mass at the foot of the Cross,

– to garner in a communion of reparation that blood of Christ which drips from the host into the chalice, according to the evocative vision of Jesus crucified above the altar in 1925.

“From Mary, Christ received His Body and Blood, which were respectively sacrificed and shed for the salvation of the world. Therefore Mary, become one with Christ, is the co-redemptrix of the human race. ”

Third part: a picture of the evils that threaten if the requests of the Virgin are not heeded.

The vision is certainly symbolic and conditional, but there is nothing to suggest that it concerns only the twentieth century! Let’s sketch an interpretation.

The Angel with the sword of fire and then the flames threatening the world, halted by “the splendour that Our Lady sends against them”, are the catastrophes that man causes when he wants to rebuild an Eden on earth without God (cf. Gen 3:24). The intercession of the Virgin prevents or attenuates them, insofar as one hears the great angelic cry, three times repeated: “Penance!” “We desire days of peace. But peace will only be achieved if we take the law of God as the standard and guide for our steps. And indeed the whole message of Fatima aims to direct our attention to this divine law. “

The “half-ruined city”, which the pope crosse  “half-trembling, with a vacillating step, afflicted with pains and sorrows, praying for the souls of the corpses he finds in the way” The Church for fifty years: hesitant in her pastors, desolated in her faithful. It is also the apostate West, full of spiritual deaths.

The mountains with their “great cross hewn of rough trunks” to which the pope and representatives of all categories of the Church walk, is it not the Mass, the presence of the sacrifice of Calvary and the prophecy of the parousia of the Son of Man (cf Mt 24,30)? The ascent into heaven – symbolized by a “steep mountain” like Horeb or Tabor – is realized in the sacramental order and in the hierarchical communion of the Mystical Body. “The true Church of Christ is made up of all those who have remained united to Peter by the same faith, the same hope and the same charity, which is the charity of Christ.”

And lastly the Pope, prostrate before the Cross, is put to death with those who follow him; “The blood of the martyrs” is gathered by two angels “with a crystal sprinkler” to “sprinkle with water the souls that approach God”. The suffering of those who have been so many in this last century (especially today in the Middle East) “killed for the word of God under the altar” of the Cross (cf Rev 6,9) becomes a co-redemption in the Blood of Christ, “a stream of life as clear as crystal that springs from the throne of God and of the Lamb. […] Let him that is thirsty draw near! (Rev. 22, 1 and 17).

This final note is clarified by the consoling words of the Virgin on June 13th: “To those who will embrace devotion to my Immaculate Heart, I promise salvation. These souls will be cherished by God as flowers placed by me to adorn his throne. “…