The land on which the College is built, formerly the site of a Roman villa, was given to a community of Benedictine monks in the thirteenth century by the Anglo-French family, Harpedan de Belleville, who then ruled the area (and eight centuries on, the family still supports our College.) The monastery built at that time was dedicated to St Anthony of Egypt (also called St Anthony the Great), the founder of monasticism. The monastery received a canonical visitation from a Papal Legate, Bertrand de Got in the late 12th century. He subsequently became the first Pope at Avignon, Clement V.

The buildings were confiscated from the Church in 1905 as part of the anti-clerical crackdown throughout France. The priests then involved with educating the boys at Chavagnes were exiled to Shaftesbury in Dorset. In 1912 the buildings were bought back by a local aristocrat, the Comte de Suzannet, and reopened as a junior seminary, much to the chagrin of the Paris authorities. (In a beautiful postscript, the latest generation of sons of the de Suzannet family were pupils at the College.)

Shortly after the Second World War the College (then the Petit Séminaire de Chavagnes) received the visit of Angelo Cardinal Roncalli, Papal Nuncio in Paris. The father of a recent chairman of governors of our College, the then Mayor, Mr Gilbert de Guerry de Beauregard, gave a welcome speech in which he alluded to the previous visit of a Papal Legate in the 12th Century and mentioned that the last one had become a Pope. He suggested that Cardinal Roncalli might also share the same destiny. Roncalli became Pope John XXIII a few years’ later. In an interesting turn, the Pope of the day, Pius XII sent a long letter of greeting to the people of Chavagnes, referring to the historic faith of the people of the Vendée area, in the wake of this visit. The letter was signed by a substitute, by the name of Martini, later Pope Paul VI.

In 1997, as had happened many times before in the history of Chavagnes, the  “ancien séminaire” closed its doors for a short time. Finally, in September 2002, with the active support and blessing of the local Bishop, a group of English, American, Australian and Irish teachers, together with two former teachers of the old seminary, reopened the school, but with a different, international emphasis.

However, he too became Pope, as Benedict XVI, making him the fifth Pope with a particular link to this remote French village and with its little “ecclesiastical school”. In one of his last acts as Pope, Benedict XVI gave the title Venerable to Father Baudouin (the founder of the Petit Séminaire de Chavagnes) on 20 December 2012. 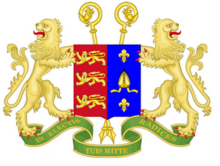